Wife,mother, lifeskill counselor, an observer of life with an ironic view and a somewhat sarcastic style. 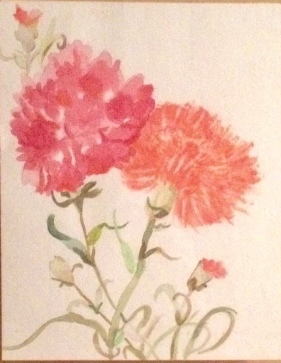 This is my peony summer. Or rather, it is the summer that  I have given  the fluffy flower its due. I admit that I’ve arrived late to the peony party.  In the first home my husband and I owned there were peonies planted next to the back step.  As the new foliage arrived that spring I was unimpressed. And when I saw all the back ants on the closed buds, yuck!  I  had no time for peonies and exported them to a welcoming and wiser neighbor.  Several years later while driving on a sunny early summer morning I spotted a rural yard with a double row of tall graceful peonies nodding in the morning sun. I appreciated their waves but did not connect them to the ant carriers I had exiled. In the next  and current home we live in, we also inherited peonies. They had earned my respect if not my warmest affection and I transplanted them from an out of sight corner to a place of prominence near the patio. But it is this summer that I’ve begun to really love these ladies.

I notice them on my morning walks in the park. The mounds of earth await the village workers bringing flats of annuals to plant. But the peonies have a permanent home in the small city park, and a head start on summer.  I watch them as they grow taller. Likewise in my own yard the green stalks have returned. Which will burst forth in color first, mine or the parks? I watch for the ants. I now know those busy, tiny soldiers, are necessary for the flowers bloom.  Where are the ants?  Don’t they know they have work to do?   The peonies that bloom first are in the flower section of the grocery store. I hold off buying them. I want my own. The park peonies bloom next. Come on, I encourage my own plant. Will it bloom soon?  Will its timing between rain storms be wise enough to protect its’ blooms? Finally, they open, three big beautiful  flowers. And it is summer.

I know what follows. The peony once opened can’t stop. Its many tiny petals reach and open further each day. Until finally they drop off the stem. Other flowers in my modest garden will need to be plucked, dead headed, as we say, or they will shrivel to brown and withered detritus. But the peony can not stop opening, until it can no longer hold on to itself. The peonies in the park, so heavy with their own beauty, lay down their weary blooms. My own, held up with wire baskets are also destined for the same end.

And then I notice all the places I have inadvertently planted peonies. On the pillows that cozy up my sofa: peonies.  On the cover of the small notebook I carry; peonies. On my wedding china; peonies. And there, framed and hung in my dining room a water-color painted by a beloved cousin; peonies.

Recently a friend sent us a beautiful arrangement of her favorite blooms. You guessed it, peonies. As I watch their intense salmon blooms open and open more. Their unbelievable color morphs into a more traditional pink. They refuse to remain static, until they are white. Only then do they start to release their petals onto the table. I do not wipe up the scattered petals. Even they seem perfect in their faded glory, laying across the mahogany.

Peonies, summer, ephemeral delights both of these. Children laughing as they run through a sprinkler. Voices in conversation, in the dark of the patio the gentle clink of ice cubes in glasses of cold drinks, moments of summer.

Poet Mary Oliver  wrote about peonies,  “with their honeyed heaviness, their lush trembling..to be wild and perfect for a moment, before they are nothing, forever.”

I’m just say’n, yes, I love the peonies, ants and all.

4 thoughts on “The Poetry of Peonies”